The main musical influences of The Bellhops are the Swing and Jive era of the late 40’s, the Rock’n’Roll of the 50’s, the Soul and R&B of the 60’s and the Blues classics. 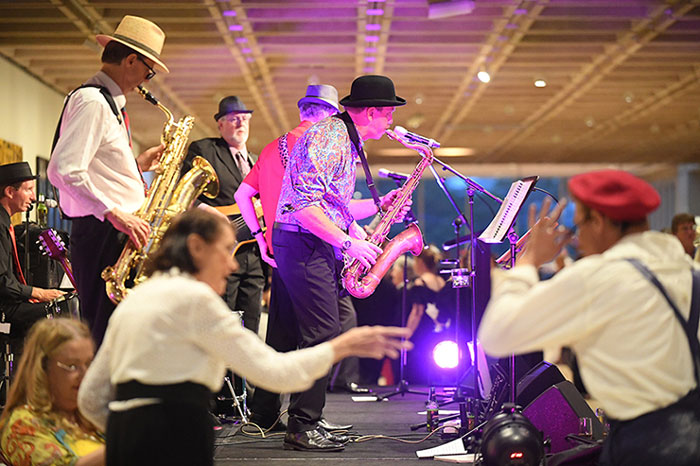 “The Bellhops were the perfect band for our member’s end of year party. They were entertaining and played just the right music for our crowd.”

“Everyone commented on how much fun the band were and it was a shame the night had to end.”

“With thanks to yourself and The Bellhops, I can safely say that our guests at The Anchorage New Year’s Eve Seafarers masked Ball had a fantastic evening. The Bellhops brought with them their own special touch of New Year’s Eve fun that certainly helped make the night the success it was.

I found the band to be thoroughly professional, their music was fabulous and what’s more they obviously enjoyed themselves. Indeed, I think the fun they had was contagious as even the staff working on the evening said they had a great time.

I would have no hesitation in recommending The Bellhops to others and The Anchorage Port Stephens is already considering hiring them again for our next New Year’s Eve celebrations.”

“On behalf on the Resident Medical Officers’ Association of the Royal Prince Alfred Hospital, I would like to convey our thanks to you and your organization for arranging The Bellhops to play at our Hospital Ball.

The Ball was an outstanding success and the band was superb in their ability to fill the dance floor and show people a fabulous time.

Their music selection was marvellous and their modus operandi was utterly professional. We would be happy to hire them again for future events. ”